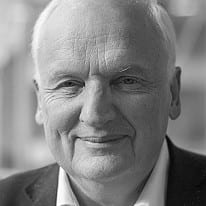 He spent 18 years at ITN in senior roles including Diplomatic Editor, Channel 4 News. He received a BAFTA in 1982 for his coverage of martial law in Poland.

He is a Visiting Professor at Kings College London and Nanyang Technological University, Singapore.

He has been a member of the World Economic Forum’s Global Agenda Council on Geo-Economics. He is an adviser on leadership challenges to the President of the UN General Assembly.

Nik has been a member of the councils of major think tanks like Chatham House and the Royal United Services Institute.

His peer-reviewed study at Oxford University ‘Skyful of Lies and Black Swans’ (2009) predicted what is now labelled ‘Fake News’. It identified the new vulnerability and brittleness of institutional power in the new all-pervasive public information space. He is also Founder-Director of Reconciliation Through Film, a charity being established to develop new ways of using communications to help conflict resolution.

Chris is a Fellow of the Royal Society of Arts (RSA).

From 2010-2014, Chris was Managing Director of the Oxford Research Group (ORG) which focuses on conflict resolution and on challenging security policy orthodoxies.

He has worked extensively on facilitating political reform in SE Europe. He directed the Communicating Europe Programme for the European Stability Initiative, 2008-2010.

As Associate Director of the Wilton Park Conference Centre, 1997-2008, Chris chaired over 50 high-level conferences; many focussing on the Western Balkans.