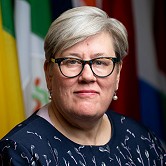 This pandemic is a dislocation. It is unlike anything that we’ve experienced in recent times. In a moment of dislocation, we have to deal with the immediate crisis, which is obviously a health crisis. But we must also think about how to build back: how to get businesses back and people back in jobs; how to get food systems and energy systems moving again.

This is also a moment for learning.

Our energy demand collapsed because we’ve all had to stay at home and economic activity and trade fell away. It is down - depending on where you are in the world - by 10 to 20 percentage points. That gives us an opportunity to really think about the energy system that we need as we come back. Why is this so important? Because the energy system accounts for the largest share of carbon emissions. It has been driving the economy closer and closer to a precipice when it comes to our ability to manage climate change.

Leading up to the COVID crisis, we were warned there was a very significant risk of a zoonotic pandemic. We have been warned that we are at risk of extraordinary economic and human impacts from climate change. As a society, we’ve got to be able to respond to what we call the grey rhinos. These are big risks that are sitting right in front of us that we tend to ignore.

We are already in a climate crisis. We’ve got a very few short years to sort this out. This decade was to be critical. That means the way the economy comes back must be resilient to the climate crisis. Therefore, we must use recovery and stimulus money to spur more and more renewable energy. With the collapse of demand, oil prices plummeted. Even before the crisis, institutional and long-term investors were walking away from coal and oil as investments. The listed major oil company stocks have been performing very badly. The value of oil and gas on the S&P is now less than 5%.

Already the world had agreed on climate action. That translates as: “OK: we need to decarbonize.” Therefore, we need to invest in what is going to be competitive in a decarbonized world. That is renewable energy, a clean way to produce steel, a low carbon way to produce cement, the hydrogen economy for shipping, trucking and aviation and industrial activity.

We must use public money to stimulate that. And the good news is that most of those green things are actually job-rich.

This is what is now up for grabs. The EU are saying that the new Green Deal will be part of the recovery. ”Green” and “recovery” are not in opposition. There are good jobs in deep refurbishment of buildings for energy efficiency and many other initiatives.

All eyes are on China to see how the leadership reacts and recovers from this. Prior to COVID19 heeding the 14th five-year plan was to be the most important climate plan for the year. How much will that have changed? In the US it’s an election year, and climate still strains to be an election issue. But the long-term recovery of the economy needs to position the US competitively and that demands investments in clean energy, clean transportation, green infrastructure, and sustainable food and agricultural.

There is no point pouring public money into a zombie company - or a company that’s going to become a zombie company within a few years. Carbon intensity is something that you don’t want to hold. Clean energy is where private investors are going.

Why would public investors want to hold on to carbon assets? Is that really a smart move? That’s creating bad assets on the public balance sheet while the private sector is going to be investing in clean.

It would be better to learn the lessons of the reconstruction of Eastern Europe in the 1980s. The European Bank for Reconstruction and Development was created to manage the transition as the Iron Curtain collapsed. That was about taking very big uncompetitive industries that were dirty and had huge payrolls, and turning them into entities that could be competitive in a global world.

I think we know a lot about how to structurally adjust. In the banking crisis of the 1990’s, Sweden showed that you could separate good assets from bad assets, and you could manage them in a sustainable way.

The public realize why far less carbon is good for them

I don’t think that investing in what is going to make the air really dangerous for us again is something that’s going to hold a lot of truck for very long, especially with young people. In Poland, for example, one big coal fired investment project was just cancelled. Why? Investors were already not showing any real appetite for that. Poland has great wind energy and other resources. It has a coal fired resource associated with one part of the country and one part of its politics, but that’s not insurmountable in the long run. Especially since the country hosted climate talks in 2017, there’s been a shift in attitude.

It’s been very interesting to watch how, while energy demand has come down, emissions have not come down quite as much. It’s about the power generating system, heavy industry, land use and deforestation. These systemic causes of high carbon emissions really need to be grappled with. For that, you really need governments working in combination with the private sector.

Public attitudes around the world say people want to be resilient and want their governments to focus on resilience. It will be interesting to see the impact of this crisis on those public attitudes going forward.

Is international agreement possible on sustainability and climate?

UN Secretary-General António Guterres describes “insipid political leadership”. Think about how slow off the mark the G20, the G7, even the UN Security Council have been. Then look at other forms of international cooperation like the spring meetings of the World Bank and the IMF. They were able to agree on a debt relief package for the poorest countries, but it didn’t go far enough, fast enough. Look at the sovereign indebtedness that a number of these countries will find themselves in if they get the access to the packages that the IMF is pushing out of the door every day.

There are major structural issues in the forums for international cooperation. We have to put scaffolding around the current forums, whether that’s the WHO or the IMF, in the management of the pandemic and the search for a vaccine that can be available and affordable for everyone. What does the IMF do when the vast majority of its members are asking for financial help? How do we make that work? The WTO is also suffering from a particular downturn in its strength at the moment.

In 2008 I worked in the international financial system. The G20 was stood up in response to the financial crisis; there were committed multilateralists sitting in key jobs in international organizations and in key jobs in government in key governments. And when there are inward looking politicians in key countries of the global economy, problem-solving is more difficult.

I am really struck by some of the leaders of smaller countries and the way they talk to their people about crises, about crisis management, and about the need to cooperate in the world.

There is something that we call reciprocal vulnerability. I think women leaders are, frankly, better at it. It’s basically where you stand up and say: “You know what? I don’t know. We don’t know. But we are going to get through this together.” This is extraordinarily powerful.

Look at the countries that have done that, versus the countries where leaders say, “We’re best at this or we’re best at that,” whether or not that’s really true. For the kind of crisis that we have now, imagine - for international cooperation - walking into the room saying: “We don’t know. But we’re going to get through this together.” It’s not a bad place to start.

This crisis is going to force us to address some issues that we haven’t really wanted to address in the last few years in a meaningful or effective way.

For example, you can grow your green beans in Naivasha [in Kenya], you can export them to the Netherlands, and I can buy them the next morning. But millions and millions of Africans don’t have access to an affordable, healthy diet. There aren’t effective local and regional markets for fresh foods.

In Africa, extraordinary amounts of investment are needed in cold storage and supply chains within the region. When a crisis comes and suddenly there’s no flights to Amsterdam or to Schiphol, everything collapses. The same is true across Latin America. Most Latin American countries are exporting their food. Yet Latin Americans are suffering from type two diabetes and increasing amounts of noncommunicable diseases because of bad diet and health as is true across the world.

‘The system is broken’

What do we learn about the lack of resilience in our food system revealed by the pandemic? This is going to be important for the next crisis: the disruption caused by climate change or some other existential threat.

That’s the conversation. We have to use this crisis to make sure that we ask different questions, the right questions, because of this vulnerability. This isn’t about, “we need to supply more and more food; there isn’t enough food in the world.” It isn’t that famine is caused by a lack of food. It’s caused by the food system: the production and the supply chains. And that is something very important that we need to take away from this process to be ready for the next global shock.

Going forward, I think that development aid is going to be under extreme pressure. There is also a further exacerbation of indebtedness of developing questions. Laurence Tubiana called in the South China Morning Post for a Bretton Woods moment. I agree with her. We need to rethink the international financial system for this crisis and for the next crisis.

Edited remarks to the Women’s Forum for the Economy and Society on 22 May 2020. Published with the speaker’s agreement.